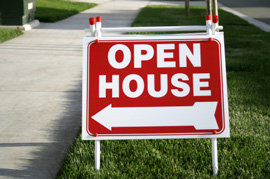 Attend Oakville open houses if you really want to sample the real estate available in one of Ontario’s finest places to live. There are several that you can find to give you a glimpse into what Oakville home life is like. Thirteen different neighborhoods exist and range from the older, downtown area to the newer areas of West Oak Trails located to the northwest of the center of the city. Oakville is truly a great place to live. It is located directly between two of Canada’s largest cities - Toronto and Hamilton. Living in Oakville gives one the access to city life with a quieter touch.

Open houses can be found around the city and as you find them, you will no doubt become more acquainted with some of the history of this gorgeous city. The heart of the city is located in what now is called Old Oakville just along the coast of Lake Ontario. The city developed around Oakville Harbour, one of two harbours in the city. The second is located at Bronte, another of the older neighborhoods of Oakville. The city was big into shipbuilding in the early 1800s before a foundry was built, which became the driver of the local economy until the 1850s when it closed.

As you travel to the various Oakville open houses, you will head into some of the outlying neighborhoods of the city. Neighborhoods like Palermo and Sheridan were actually their own separate communities prior to the 1960s. In 1962, the town of Oakville merged with several neighboring villages and what was left of Trafalgar Township to become pretty much what it is today. By the 1970s, the city was in its full modern version with its northern border right along Highway 407. Oakville has easy access to both Toronto and Hamilton via Highway 407, Ontario Highway 403, and the Queen Elizabeth Way.

If you come for any Oakville open houses, you should come during one of the city’s many festivals to get a feel for life in Oakville. There are two summer festivals that draw hundreds of thousands of people to Oakville. You can see what it might be like to live in the Old Oakville area of the city. The Downtown Jazz Festival is held each summer and brings in all sorts of jazz musicians from across Canada and United States. The event is free to the public. The other summer festival is the annual Waterfront Festival, which includes musical entertainment as well as amusement park rides for kids and adults. Oakville also hosts a spring festival, the For the Love of the Arts Festival, which has been held every year since 2002.

Oakville is home to seven beautiful golf courses that are frequented by thousands of visitors throughout the season. If you happen to attend any Oakville open houses in Glen Abbey, be sure to check out the Glen Abbey Golf Course. This is the home of the annual Canadian Open. You should also check out the miles and miles of trails as well as the numerous parks throughout the city.


To return from this Oakville Open Houses page to the Oakville Homes And Condos page, click here.